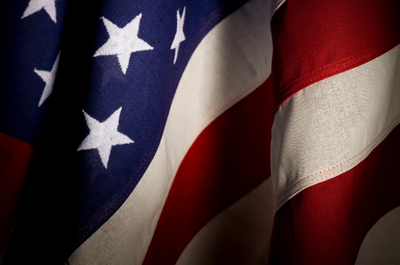 Flags. You see them wherever you go. When you visit McDonald’s every morning, what do you see flying over the parking lot aside from extremely sick seagulls? A flag. When you refuse to stop driving your go-kart at the family fun park, what checkerboard-pattern thing does the attendant keep angrily waving at you? A flag. When you squint really hard while looking at the moon, what do you notice stuck into its surface? If you’re sensing a theme of questioning here, then you can probably guess at the answer: You see a flag.

Several flags from prehistory have endured into our enlightened times. Neolithic flags have reportedly been recovered from the Dingding Cave in China, although many scholars doubt their authenticity because they include plastic grommets and have “Made in China” written at their bottoms. Likewise, the supposedly Neolithic flags discovered at the Chütlhüldütl Settlement in Central Turkey were deemed by scientists to just be extremely dirty. But the flag discovered at the former site of the Aztec city-state Axolotlfrotlhuatlcolātlhīlpoctliacamolli appears to be the genuine article. It also features mastodons, however, which is truly unfortunate because contemporary scholars just aren’t as excited about the animal as early man seems to have been.

Flags didn’t really take off until Mediterranean civilization began picking up steam. In 1881 German adventurer Heinrich Trinkenschuh discovered a Neo-Sumerian flag in South-central Iraq bearing this message: 𒀴𒀥𒁖𒁣𒀡𒁤𒀉. Loosely translated it reads “Adamen’s Figs & Wine,” which we may assume was an early snack bar of sorts. Imagine Trinkenschuh’s surprise when he unearthed identical flags in Egypt, Qatar, and Jordan. These flags provide solid evidence that the Sumerians developed the commercial franchise long before Singer Sewing Machine Company thought up the concept in 1851.

Several flags made by the Ancient Greeks survive into the present day. You can’t dig six inches into the ground around Athens without uncovering a pennant bearing three Greek letters, such as ΓΔΗ, ΒΘΞ, ΩΚΠ, and ΛΥΛ. Also buried around these flags are empty liquor bottles, polo shirts with collars permanently starched in the upright position, and pills with cartoon characters imprinted on them. The exact purposes of these mysterious artifacts are still unknown, but preeminent historian Chad P. van der Veen has theorized that the Ancient Greeks were “total effen bros who knew how to effen party” (van der Veen, C.P., A Brief History of Effen Partying).

The subjects of Latin flagēos range from the mundane to the extraordinary. One flagēus recovered from Florence reads “Augustus’s Fried Oysters” in Latin, although no evidence exists that Augustus ever managed to franchise. Another flagēolis discovered near the outskirts of Genoa is made of mosaic tile. It is thought not to have fluttered very well, thus the reason for its apparent abandonment.

The most notable Ancient Roman flagēoli was unearthed just outside of Grosseto in 1935. Named the “Boombatz Flagēola” after the local doctor who discovered it, this banner depicts Jove disguised as an ostrich doing something genuinely reprehensible to several Vestal Virgins. (Vexillology enthusiasts solely appreciate the Boombatz Flagēolus for its artistry, not its subject matter.)

The Fall of the Western Roman Empire marked the beginning of a dark age for flags. The medieval Poles reportedly created beautiful flags around the 6th century, but sadly these were all lost when Bolesław the Dingbat put them all in one place and forgot where. Likewise, King Pierre Richelet Aux Pétard je Lorioux Oueuraxeux ordered all of Medieval France’s flags destroyed when he learned that a single banner poking fun at his receding hairline had been created by one of his subjects. Lorioux Oueuraxeux also used this insult as justification for marrying his cousin and invading Medieval Germany, which resulted in the creation of Schumstenberg, now a tax haven with a population of 14.

The British people restored the art of creating flags. They did so because their empire’s navy, which exceeded 83 million ships during its heyday, required flags as a means of distinguishing so many ships from one another. These flags typically depicted simple colorful lines and fields, although several flags depicting King George V in various lurid poses with the letters “SWM DTF NSA” were also flown from British ships’ masts.

The Americans would proceed to create the best flag of all immediately after winning their independence – the American flag. This is the same flag that you can see when you squint real hard at the moon, but the Americans cleverly made more than one. You can find the American flag flying in front of government buildings, outside of sports stadiums, outside of suburban houses, outside of rural houses, on the backs of rural pickup trucks, and in the backgrounds of Republican politicians’ televised campaign advertisements. It is a really great flag, although communists occasionally burn it when they wish to make it known that they would like to be the very first ones sent to work camps once their ridiculous revolution takes place.

That brings us to the present. As we look to the future, who knows what exciting new flags await us one day? We can only guess which flag will be planted on Mars after America has put her flag there first. And surely mankind has not finished founding new countries, each of which will require its own respective flag. I only wish to recommend that none of these hypothetical countries put the mastodon on their flags, because honestly that idea has already been played to death.