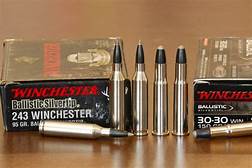 The .243 Winchester, AKA 6×52mm,  was introduced in 1955 for its two most popular rifle models, the Model 70 bolt-action and the Model 88 lever-action. Winchester used a case from a .308 Winchester to create a bottle-necked, rimless, centerfire cartridge that was designed to control varmints. Designers reduced the case, necking it down to handle a bullet with a flat trajectory. They wanted to create something that would be able to kill larger varmints, like coyotes, that couldn’t be taken down by a .22 bullet.

The .243 Win was an instant success with hunters due to its light weight. The 70 to 85 grain round proved to be perfect for varmint hunters. They needed a round that could take long-range shots, as long as 400 yards. Hunters targeting medium-sized game such as whitetail deer, coyotes, mule deer, pronghorns, and wild hogs use a 90 to 105 grain cartridge to ensure a kill. The .243 is considered to be the most popular deer hunting cartridge on the market, therefore it’s always easy to get.

Shooters appreciate the .243 for its versatility. It is the first commercially produced round that covers both sides of game hunting. It uses soft point and power point bullets with weights ranging between 55 and 115 grains. Muzzle velocity ranges from about 2,800 feet per second (FPS) to 3,900 feet per second (FPS). The muzzle energy ranges from 1,700 to 2,600 foot pounds (ft-lbs).

Gun enthusiasts are familiar with rounds that have been altered by legendary munitions expert P.O. Ackley. Ackley was a famous wildcatter, writer and firearms expert. He was always after a larger case capacity, and began re-chambering his weapons. He used fireforming on various rounds, decreasing the body taper and increasing the shoulder angle. The result was a higher case capacity. In 1955, he created the .243 Winchester Ackley. The cartridge sported a 10% larger powder capacity with a slightly increased velocity.

Ackley opened his Oregon-based gunsmithing business in 1936. WWII interrupted the operation, and then he re-opened in Colorado in 1945. Ackley adapted over 30 rounds to meet his specifications. Some wildcatters honor Ackley by saying their creations are “Ackley Improved.”

Many hunters credit the round as the one used to take down their first deer. Shooters like the low recoil and low noise. It makes it easier to use for smaller or less experienced hunters to get a solid bead on their target. High accuracy made it a smart choice for the Los Angeles Police Department Special Weapons And Tactics unit to adopt shortly after it went to market.

While the .243 is popular in the U.S., internationally the round is subjected to UK’s Deer Act of 1963. The legislation restricts weapons and rounds during certain seasons. The law specifies a minimum bullet diameter of .240 inches. This makes the .243 an entry-level cartridge for legal deer-stalking. However, the .243 is available in other countries, such as Spain, where it takes the place of guns using restricted “military calibers.”